In the Spring of 2018, while interning abroad in Seoul, Korea, a friend and I visited the Cheongun Literature Library. We arrived at the library by an uphill winding neighborhood road surrounded by lush forest along the Inwangsan Mountain foothills that overlook the metropolitan city of Seoul.

The staggered layout of the buildings combines a modern library on the lower slope of the hill and on the upper level behind it are two traditional “Korean houses” known as Hanok; an architectural design of the 14th century Joseon Dynasty. 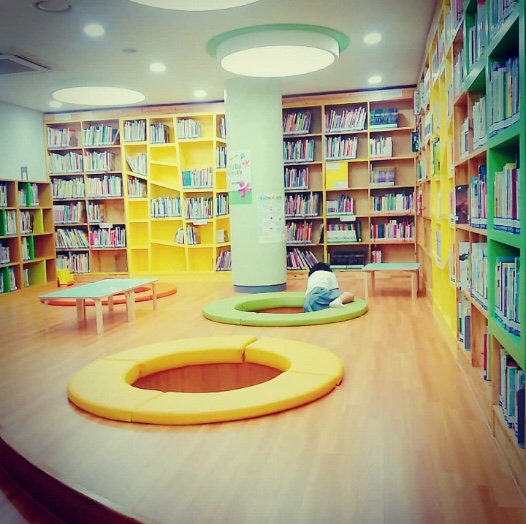 The modern building houses the facilities, a small café, access services, library materials, a children’s area, a lecture room, and plenty of seating with a view of a humble bamboo garden. The collection focuses on Korean literature as well as other literary works from around the world.

The upper-level floor of the Cheongun Literature Library is outdoors to the Hanok; a more private area to read, study, create, and relax. It is accessible via the main library building, outdoor stairs, and a walking path from a second parking lot further up on the main road behind the Hanok.

During Spring season, one can appreciate the aesthetics of the surrounding lush greenery, a steady flowing waterfall, a beautiful view of Inwangsan foothills, and a unique Korean sunset. Further uphill behind the Hanok are many famous hiking trails, a park, literature museum, and historical landmarks of Inwangsan Mountain.

As I wandered the grounds and within the Hanok, I took in the refreshing Spring breeze, the calming sounds of the nearby waterfall and other sounds of the surrounding nature.

Inside the Hanok are designated 열람실 or “reading rooms” equipped with electrical outlets, comfortable floor seating fashioned with cushions and low tables, modern-style ondol heated floors used during the colder months, and most certainly…Wi-fi!

If one ventures further up behind the Hanok, one may witness a breathtaking aerial view of the Hanok, the lush forest, and in the not too far distance the skyscrapers from the heart of downtown Seoul…and perhaps if your timing is right; a unique Korean sunset.

The Cheongun Literature Library deeply resonated with me because it reflects the intersection of cultural preservation and restoration with libraries in modern Korean society.