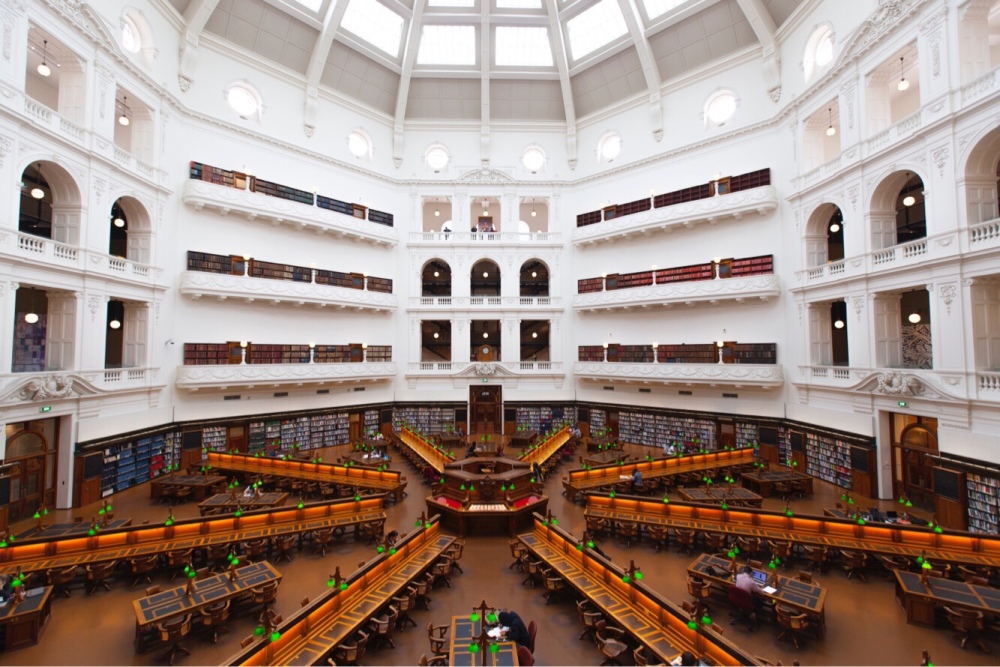 Melbourne is well known for its thriving public library network, although the gem at the city’s centre is none other than the State Library of Victoria. State Library Victoria, Australia’s oldest public library is home to a large rare books collection, including authors from Shakespeare to Charles Darwin to Patrick White.

The library, taking up a full city block with its reading rooms, displays, galleries and collection spread across a number of buildings, was founded in 1854. The State Library Victoria was the first major cultural institution to be established in Melbourne and now attracts over 1.9m visitors annually, having become not only a library but a place for passionate demonstrations, protests, and whose entrance steps have become a refuge and staple of Melbourne’s CBD. The green grass garden out front boasts as the best place for CBD goers and workers to sit and have their lunch on a sunny day.

As one of the first free public libraries in the world, State Library Victoria has adapted to not only cater to its modern day community of all ages and experiences, but to also preserve Victoria’s heritage by collecting items of historical and cultural significance for future generations. Researchers burying deep into the treasures of the library’s collection, students, families, young and lifelong learners, cultural creators, seekers and regional Victorian’s all have found use of the libraries features such as free Wi-Fi, free computer access, study areas, regular talks, launches and other events.

Currently, the State Library Victoria is in the last stretch of creating new innovative spaces for children and teens as well as the integration of new technologies promoting digital literacy and creativity.

While also housing the Wheeler Centre (Melbourne’s passionate home for literature, writing and ideas), in its own dedicated wing, the State Library of Victoria boasts some of the best coffee in Melbourne to be found in Mr Tulk (named after the library’s first librarian; Augustus Tulk) and the Guild Café.

There is nothing better after an intense study session or a dig into the library’s historical exhibitions, to grab yourself a coffee or tea and browse the State Library Victoria’s bookshop, run by the award-winning independent bookseller, Readings.